The ship that saved 7 during ‘Perfect Storm’ to be sunk off N.J.

Home/ATF, News/The ship that saved 7 during ‘Perfect Storm’ to be sunk off N.J.
Previous Next

The ship that saved 7 during ‘Perfect Storm’ to be sunk off N.J.

The USS Zuni survived the submarine-infested waters of the Pacific during World War II as it towed torpedoed warships to safety and aided in the Battle of Iwo Jima.

A half-century later and renamed the Tamaroa, it overcame gale force winds and 40-foot waves to help save seven people off the New England coast, a rescue effort immortalized in the book and film “The Perfect Storm.”

But the Tamaroa could not conquer time.

This ship that has made so much history will soon be sunk off the southern coast of New Jersey to help expand an artificial reef that attracts both scuba divers and anglers. A decadelong effort to turn the ship into a museum and memorial was derailed when the Tamaroa’s hull sprung a leak four years ago, causing significant damage to key parts of the ship.

Having the Tamaroa sit on the ocean floor isn’t how many who served on the ship envisioned its fate. There is, after all, an emotional attachment to the ship far more powerful than mere nostalgia. The Tamaroa was home to generations of crew members who routinely risked their lives in some of the most brutal conditions to save others.

The man who commanded the ship during the 1991 “Perfect Storm” said sinking the Tamaroa is a better outcome than being demolished for scrap metal, a common ending for old service ships.

“It’s always sad when you sink a ship, but some good will come of it,” retired Coast Guard Capt. Larry Brudnicki said. “It’s being repurposed. It’s being used. If it’s cut up, who’s going to know that their razor blade came from the Tamaroa?”

They plan to sink the Tamaroa around Oct. 30, the 25th anniversary of “The Perfect Storm,” although no official announcement has been issued.

“It’s like anything else, it’s name recognition,” said Brian Nunes-Vais, a trustee with the Ann E. Clark Foundation, which helps fund New Jersey’s artificial reef program. “Would you want to dive Bob’s boat or the Tamaroa?”

Long before the “Perfect Storm” the Tamaroa was the Zuni. It was launched July 31, 1943, and deployed as a Navy tug to the war-torn Pacific, hopping from island to island as the U.S. drove Japanese forces back east.

It would tow two heavily damaged cruisers, the USS Houston and USS Reno, hundreds of miles to safety, according to the Navy’s history of the ship.

In 1945, the Zuni arrived at Iwo Jima three days after the assault began and stayed there for a month. It pulled a transport off a sandbar and deliberately ran itself aground to help get ammunition to a disabled landing craft. Two crewmen later died when a tow cable snapped and struck them. They were the only casualties during a two-year span in which the Zuni participated in four invasions and traveled thousands of miles in seas patrolled by Japanese warships and skies swarmed with fighter squadrons.

Of the dozens of men who served on the ship, the last known surviving member of the original crew was Lt. Herb Ruben of Westchester County, N.Y., who died last year at 94.

“He always said it was a ship that could take anything,” said Elinor Parsont, Ruben’s widow. “He was very proud of being in the Navy and being on the Zuni.”

A year after the war ended, the Zuni was transferred to the U.S. Coast Guard and renamed the Tamaroa, where it spent almost five decades rescuing ships in distress, intercepting drug smugglers and enforcing fishery laws. In 1956, it was one of the first ships to reach the sinking luxury liner Andrea Doria off Nantucket, where it helped rescue more than 1,600 passengers and crew.

But it was on Oct. 30, 1991, that it made history, when three storm systems slammed together off the New England coast with gusts of 70 mph and waves as high as a four-story building. 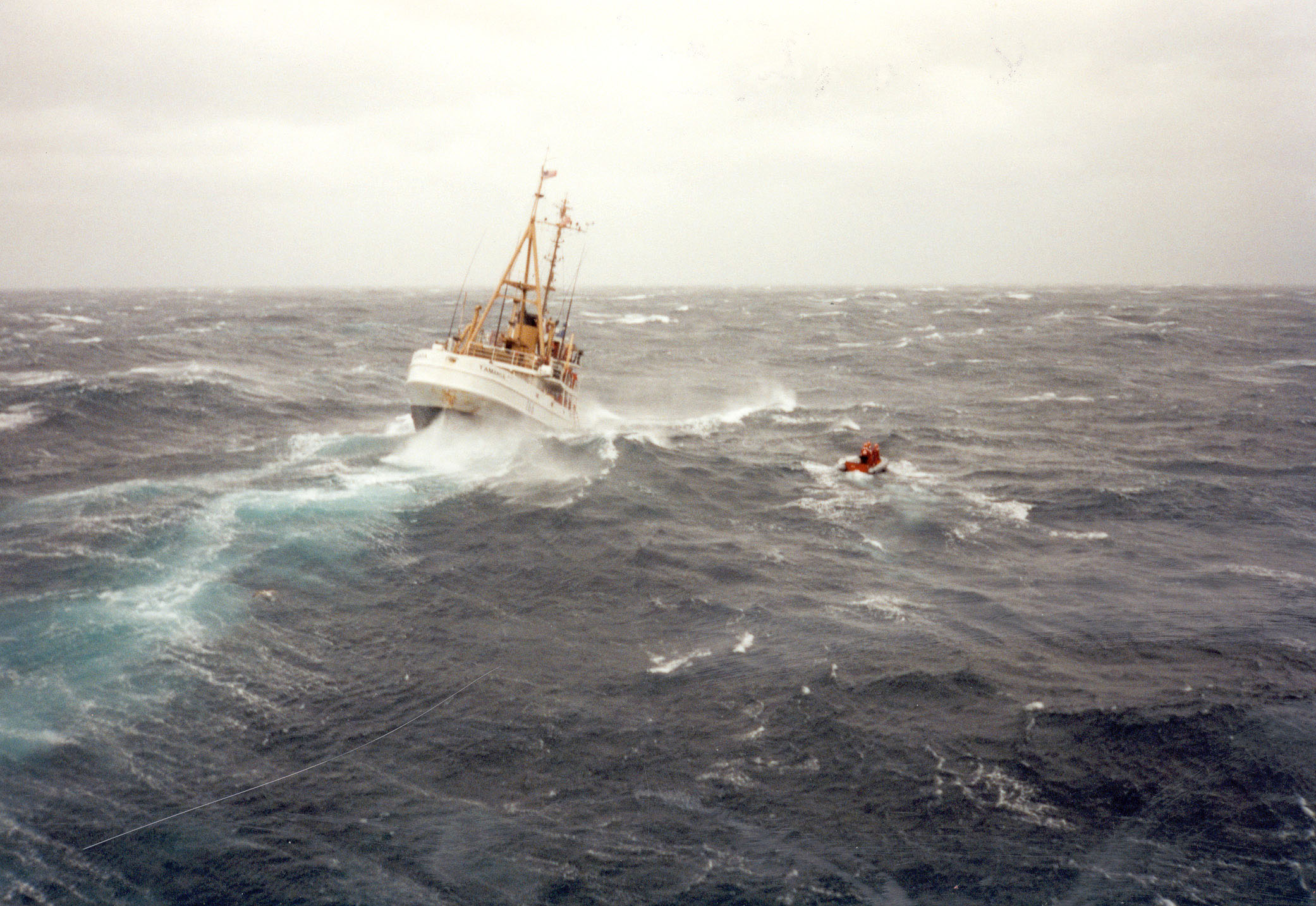 The Coast Guard cutter Tamaroa sends its rigid hull inflatable rescue boat, right,to help the sailing vessel Satori on Oct. 30, 1991. Satori, with three people onboard, needed help about 75 miles south of Nantucket Island during the nor'easter that came to be known as The Perfect Storm.Photo Credit: Coast Guard
The Tamaroa was dispatched to find a sailboat, the Satori, which was caught in the storm 75 miles off Nantucket.

The Tamaroa tried to rescue the Satori’s three crew members via a smaller, inflatable boat it had launched. The crew was able to toss survival suits to the three men on the Satori. But the waves were too much and the Satori’s stern came crashing down on the smaller boat. Both crews were soon hoisted up to a helicopter and flown to safety.

The Tamaroa’s work was far from done, though. It was soon sent to rescue the crew of an Air National Guard helicopter. The Jolly 110 had run out of fuel on a rescue mission in the storm and had to be ditched in the ocean. Bobbing up and down in the sea, the Tamaroa made several attempts over two hours before finally hoisting four of the five crew members aboard.

The storm claimed the life of Sgt. Rick Smith, of the Jolly 110, along with six fishermen who died when their boat, the Andrea Gail, was sunk.

The storm made national news but attention quietly died down. For years it was called the “No-Name Storm” until the Tamaroa’s exploits were documented in Sebastian Junger’s 1997 book, “The Perfect Storm,” and three years later in a film starring George Clooney.

Brudnicki said newer Coast Guard cutters would not have been able to make a rescue in “The Perfect Storm.” The Tamaroa was 700 tons heavier and sat 6 feet deeper than more modern ships. That allowed it to endure the hill-sized waves.

“We would not have been able to sustain the waves we took if we were in a more modern ship,” said Brudnicki, who retired in 2002. “Back then, they built ships to last.”

But only three years after the storm, the Tamaroa was decommissioned. It changed ownership several times and was moored on the Hudson River and then in Baltimore. A group of Navy and Coast Guard veterans formed the Zuni/Tamaroa Maritime Foundation, with the goal of restoring it.

After almost a decade of work and tens of thousands of dollars spent moving it to Norfolk, Virginia, the ship sprung a substantial leak in 2012 and saltwater flooded key parts of the vessel. Repairs were estimated to cost as much as $2 million.

With few options, the foundation members resigned themselves to sinking the Tamaroa.

“I’d rather see her be a permanent undersea memorial than be scrapped,” said Bill Doherty of Rockland County, N.Y., who served on the Tamaroa in the late 1960s, when it was based in New York Harbor. “She has too much history for that.”

New Jersey and Delaware acquired the Tamaroa for $300,000, much of it raised through non-profit groups like the Ann E. Clark Foundation, which gave $90,000. It will join the Navy destroyer USS Arthur W. Radford 120 feet below the ocean’s surface on the Del-Jersey-Land Reef, which is managed by Delaware, New Jersey and Maryland.

The ship has spent months being prepped at a shipyard in Norfolk to ensure no PCBs, asbestos, engine oil or other hazardous materials end up in the ocean.

Harry Jaeger, co-founder of Zuni/Tamaroa Maritime Foundation, said sinking the ship is the best outcome. It was a workhorse boat that will continue to be put to good use, he said.

“You want to see it? Put on your scuba gear and it’s right there,” Jaeger said. “It’s the best outcome, given the circumstances.”

Not every piece of the Tamaroa will be on the ocean floor, however.

Lt. Col. Dave Ruvola, the pilot of the Jolly 110 whose crew was rescued by the Tamaroa during “The Perfect Storm,” heard the ship was in danger of being scrapped a few years ago and wanted a memento. The foundation gave him a porthole.

Today, it hangs at the headquarters of the 106th Rescue Wing in eastern Long Island in honor of Rick Smith, the pararescueman who died when the helicopter went down.

“It was the ship that saved my life,” Ruvola said. “So I thought it was fitting that we use a piece of Tamaroa to pay respects to Rick. He was a guy who gave his life trying to save others.”

Scott Fallon writes for The Record in New Jersey.

About the Author: Dennis G. Colton