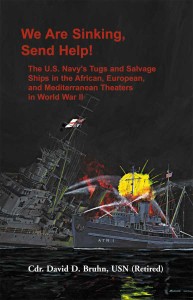 We are Sinking, Send Help!, a new book by David D. Bruhn devoted to the U.S. Navy’s tugs and salvage ships in the African, Mediterranean, and European Theaters in World War II, may now be ordered online from Heritage Books: http://www.heritagebooks.com/

Book description: U.S. Navy tugs and salvage ships were in the thick of the action during the invasion of French North Africa, the lengthy, bitter Italian Campaign, and the invasion of France in World War II.  Seventeen officers and men from the salvage ship Brant and the fleet tug Cherokee received Navy Cross Medals for their heroic actions during a special operation in French Morocco.  Cherokee was the first Atlantic Fleet tug to earn a battle star overseas.  Tugs and salvage ships were with the Fleet at Sicily, Salerno, Anzio, Normandy, and during the invasion of southern France.  Tugs saved many ships damaged by combat action, and the lives of sailors and soldiers aboard aflame or sinking ships, or in the sea. These workhorses also pulled scores of landing craft off hostile beaches.  Thirty-six tugs and six salvage ships collectively garnered sixty-six battle stars.  The fleet tugs Arikara and Pinto, and rescue tug ATR-2, received the Navy Unit Commendation for their work off Omaha beach at Normandy.  Officers and crewmen who took vessels into harm’s way received awards for valor for acts of heroism performed under fire.  Following the capture of enemy ports, tugs and salvage ships and their salvage personnel worked with minesweepers and mine clearance divers to open harbors critical to sea-supplied support of Allied troops ashore.

Additional information about the book may be found at: www.davidbruhn.com

About the Author: Dennis Colton